Cameron Bellamy, whose swim around Barbados last year was recognized as MSF's Solo Swim of the Year, will attempt another huge swim in the next couple weeks. Barbados to St Lucia is a minimum of 90 miles, but the straight-line distance of his actual start and finish locations may exceed 100 miles. They are promoting this as the "longest channel swim," which is accurate because Cuba-Florida (103 miles) has never been done unassisted. 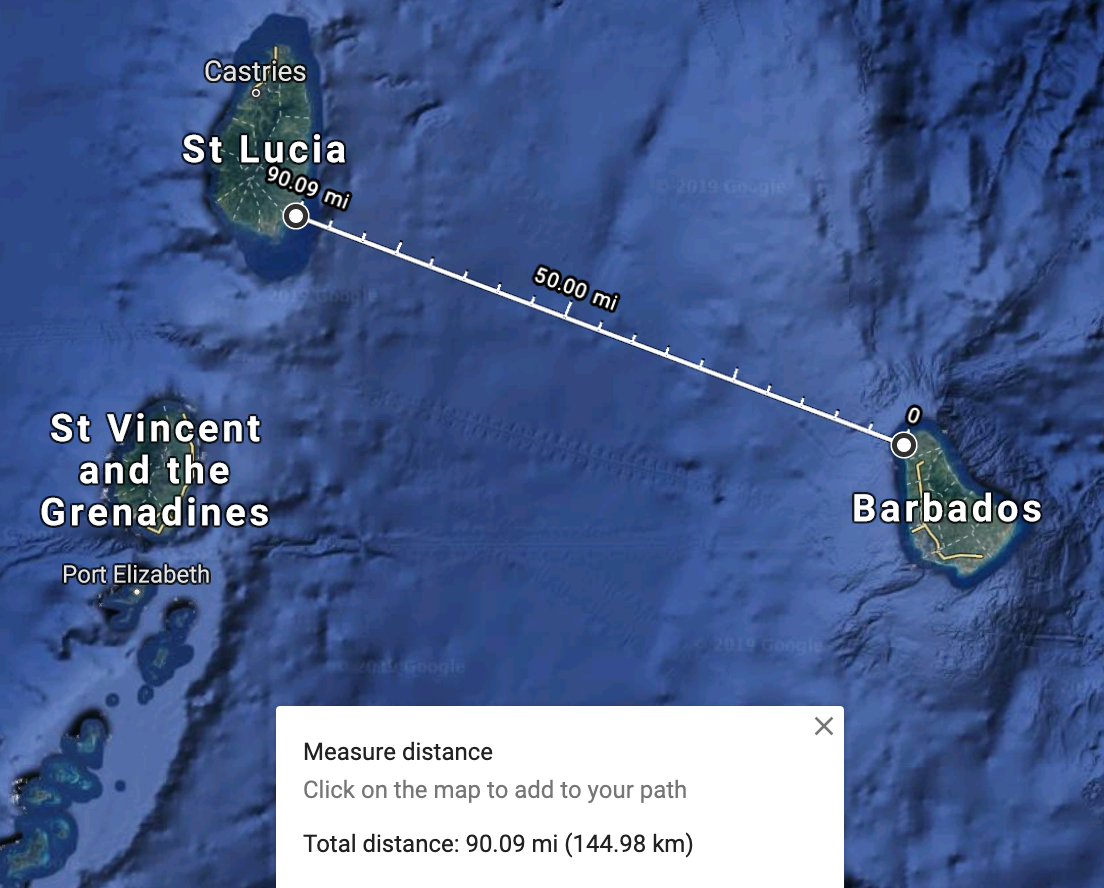 South African ultra-endurance athlete, Cameron Bellamy owns an exceptional sporting resume. He has completed the Oceans Seven swims, rowed across the Indian Ocean and swam around the island of Barbados. Now, after months of arduous training where he logged innumerable hours swimming every week, he is in the final days of preparation for an extreme endurance test: a 100-mile Swim across the open ocean from Barbados to St Lucia.

The initial plan for 2019 was to attempt a swim from Havana, Cuba to Key West, Florida. Cameron put in the rigorous training, spent considerable time researching the past attempts, secured a support boat and assembled a global support crew to join him on the swim. However, in late August, the permission required for the support boat to enter Cuban waters was denied by the US Government, based on the more stringent regulations enacted in June 2019.

Despite this extremely disappointing setback, Cameron, who hasn’t given up on his Cuba swim dream, continued his “crazy” swim schedule including two recent 24-hour training swims and devised an incredible alternate plan. Plan B: pioneering a new swim route between Barbados and St. Lucia – this will be the longest channel swim ever. The distance is about 100 miles or 160K, a comparable distance to the Cuba Swim but in Bellamy’s words: “Its trickier than the Florida Straits in myriad ways.”

In November 2018, Bellamy, completed the highly complex circumnavigation of the island of Barbados, swimming a gruelling 60 miles around the jagged coastline in 40 hours and 43 minutes. Earlier in 2018, Bellamy, a World Record holder in ocean rowing, had earned the Oceans Seven title for swimming the world’s seven toughest channels.

The “Swim Around Barbados” was a highly significant, defining moment in the life of athlete extraordinaire, Cameron Bellamy. The fourth longest non-stop, unassisted sea swim ever was completed under imperfect conditions including fourteen plus hours of adverse currents, detours due to large swells, a powerful squall and frequent backwash from cliffs. But Bellamy, a man who exemplifies the very definition of perseverance, drew on his steely resolve, maintained an uncanny focus and similar stroke rate throughout and with his sheer determination defeated the unforgiving seas after almost two days of swimming. This outstanding success announced the arrival of a serious contender for conquering the world’s longest and most difficult open water swims.

The start of the Barbados to St Lucia swim is tentatively scheduled for September 15 and is dependent on a suitable “weather window” - a period of at least three days when favourable conditions are predicted. The swim could take between fifty and sixty hours to complete and real time tracking will be available online.